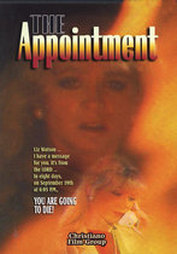 What would you do if a total stranger told you the exact time and date of your death? Would you believe him or just call him a nut and go on with your life? The movie, The Appointment is a film that not only asks this question, but shows the viewer just how easily people believe the lies of the world.

Rich Christiano, who directed such films as Unidentified and Time Changer, made this movie nearly nineteen years ago, yet the film’s message is still just as powerful as his newer films. The gospel of Jesus Christ is the same, it doesn’t have to be modified to fit into an ever changing world; the truth never changes.

This movie contains no foul language or sexual situations. The film does present the gospel of Jesus Christ. This movie would make a great witnessing tool for outreach leaders. Because of the serious subject matter, I would recommend this film for teens and adults.