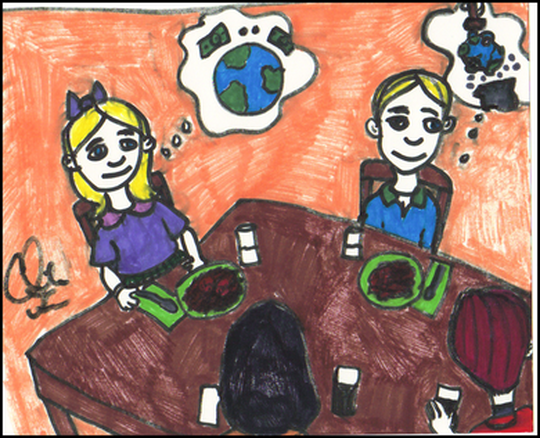 Story & Illustrations by LC Green, view more of her creations at www.greengreenjellybean.weebly.com
Ryan and Rebecca helped their mother set the dinner table.  They were having spaghetti and meatballs, their favorite.

After their dad prayed over the meal, they began to eat. Rebecca liked to save her meatballs to eat last, but Ryan ate his immediately. Their mother told them to eat slowly, and reminded them to keep their elbows off the table.

Before their mother could take a bite of dinner, she looked up at their father.

“Did you remember to pay the property tax this month?” She asked her eyes wide.

“Yes…I did…remember I dropped the payment off on the way to work Friday.” He said.

Rebecca looked up from her plate. She was smiling. “Hey…I know what tax means.” She proclaimed.

“Yeah we learned about taxes in Sunday School.” Ryan chimed in.

Their father smiled at their mother.

“You did, well…what did you learn about taxes?” He asked softly.

“You see this guy Sneezer Robustus…well he decided that he was going to make everybody in the world pay taxes!” Ryan exclaimed.

Rebecca began to giggle. Ryan looked over at her and wrinkled his nose.

“It’s pronounced Caesar Augustus, son…and it’s impolite to interrupt when someone is talking” Their mother said, trying not to laugh.

“Oh.” Ryan said softly. He looked over at Rebecca.

“Ok, so Caesar Augustus made a degree to tax the world.” Rebecca continued.

“It’s a decree, pumpkin…go on.” Their father said, grinning.

“Well everyone had to go into their city to be taxed.” She said.

Their father looked at her mother and they both smiled.

“That’s right, everyone including Joseph and Mary, who was pregnant with Jesus, went to be taxed…and believe it or not, the world still gets taxed; we pay taxes on almost everything these days.” Their father said.

“Daddy, why did God allow Caesar Augustus to tax people like Mary and Joseph?” Rebecca asked, in a soft voice.

“God always has a purpose for everything…make sure you pay close attention in Sunday school next week, I have feeling your teacher will shed some light on the subject.

Ryan looked up at his mom and dad. “I thought Caesar was something you put on a salad.”

Luke 2:1-3 (KJV) 1 And it came to pass in those days, that there went out a decree from Caesar Augustus, that all the world should be taxed. 2 (And this taxing was first made when Cyrenius was governor of Syria.) 3 And all went to be taxed, every one into his own city.

In the days prior to the birth of Jesus, the world was taxed; each person went into the city where they were from, to be taxed. Over two thousand years later, the world is still being taxed, yet there is someone that is greater than taxes, or anything else in the world, that
someone died on a cross to pay a debt that nobody else could ever pay, that someone is Jesus Christ.

Ryan and Rebecca’s dad was right, please join us next week as we shed light on the purpose of the events leading up to Christ’s birth. You may learn something new.

So until we see you again remember Jesus loves you and keep your eyes and your heart open to His lessons on this journey through life.
God Bless LC