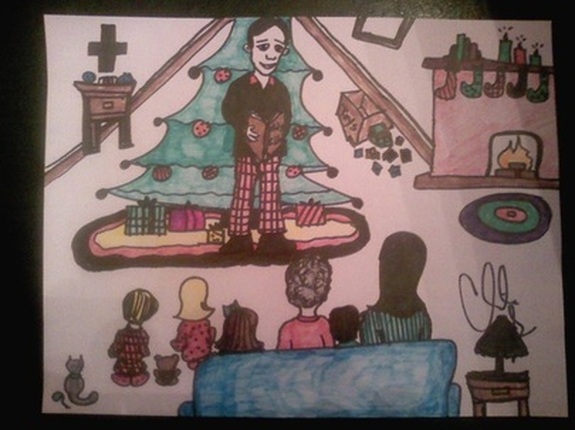 Story & Illustrations by LC Green, view more of her creations at www.greengreenjellybean.weebly.com

It was Christmas Eve. The family had gathered in the family room.

Ryan and Rebecca were wearing their new pajamas and waiting for their dad to read the Christmas story, he was standing in front of the Christmas tree; the lights sparkled, making his hair look as if it was glowing.

He held the old Family Bible; the same Bible his dad read the Christmas story from when he was a child. He opened it and thumbed through the pages. He read
from the gospel of Luke chapter 2. He spoke of the angel that visited the shepherds and told them the amazing news of Christ’s birth. He read about their
journey to the town of Bethlehem, and how they found Mary, Joseph, and the babe lying in a manger, just as the angel had said.

When he had finished reading, the twins looked at one another.

Yeah, it was on the Charlie Brown Christmas special! Ryan exclaimed.

Benjamin joined the twins on the floor.

Oh yeah that was when Charlie Brown what Christmas was all about.

And Linus tells the story about the shepherds. Rebecca says.

Luke 2:6-20 (KJV) 6 And so it was, that, while they were there, the days were accomplished that she should be delivered. 7 And she brought forth her firstborn son, and wrapped him in swaddling clothes, and laid him in a manger; because there was no room for them in the inn. 8 And there were in the same country shepherds abiding in the field, keeping watch over their flock by night. 9 And, lo, the angel of the Lord came upon them, and the glory of the Lord shone round about them: and they were sore afraid. 10 And the angel said unto them, Fear not: for, behold, I bring you good tidings of great joy, which shall be to all people. 11 For unto you is born this day in the city of David a Saviour, which is Christ the Lord.12 And this shall be a sign unto you; Ye shall find the babe wrapped in swaddling clothes, lying in a manger. 13 And suddenly there was with the angel a multitude of the heavenly host praising God, and saying, 14 Glory to God in the highest, and on earth peace, good will toward men. 15 And it came to pass, as the angels were gone away from them into heaven, the shepherds said one to another, Let us now go even unto Bethlehem, and see this thing which is come to pass, which the Lord hath made known unto us. 16 And they came with haste, and found Mary, and Joseph, and the babe lying in a manger. 17 And when they had seen it, they made known abroad the saying which was told them concerning this child. 18 And all they that heard it wondered at those things which were told them by the shepherds. 19 But Mary kept all these things, and pondered them in her heart. 20 And the shepherds returned, glorifying and praising God for all the things that they had heard and seen, as it was told unto them.

I like Linus, he’s my favorite peanut! Megan says.

Benjamin, the oldest cousin asked. “Why do you think God chose shepherds to be the first to see the baby Jesus?”

Their grandma answered him.

“The richest man and the poorest man… are all equal in God’s eyes…Jesus came to save everyone.” She said softly.

John 3:16 (KJV) For God so loved the world, that he gave his only begotten Son, that whosoever believeth in him should not
perish, but have everlasting life.

That’s why Linus said, “That’s the story of Christmas”.

All the kids stood up, and proclaimed!

Isaiah 9:6 (KJV) 6 For unto us a child is born, unto us a son is given: and the government shall be upon his shoulder: and his name shall be called Wonderful, Counsellor, The mighty God, The everlasting Father, The Prince of Peace.

Matthew 1:21 (KJV) And she shall bring forth a son, and thou shalt call his name JESUS: for he shall save his people from their  sins.

In the small town of Bethlehem, Jesus Christ was born in a manger, because there was not room for Him at the inn. The angel of the Lord appeared to a group of Shepherds, telling them the exciting news of Christ’s birth. They traveled into Bethlehem and found the baby, with Mary and Joseph, lying in a manger, just as the angel had told them. They went their way and spread the joyous news of Christ’s birth.

Over the last month, we examined the different events leading to the birth of Christ, The visit from the angel, the taxing of the world, the journey into Bethlehem, and finally the birth of Jesus.

Jesus truly is the reason we celebrate Christmas. I wish everyone that reads this a Merry Christmas and in the words of young Ryan, Happy Birthday JESUS!

Join us next week for a special New  Year’s story!

So, until we see you again remember Jesus loves you and keep your eyes and your heart open to His lessons on this journey through life.