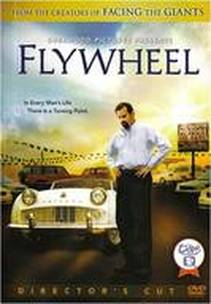 I was amazed such a simple story cold resonate so well with me; I can honestly say this film opened my eyes to how important faith is in a Christian's life. I think the coolest thing about this movie, is instead of spending tons of money on famous actors, or expensive equipment, this film relied on its overall message to carry it; and I can honestly say it worked.

Flywheel is the first in a series of Christian films produced by Sherwood Films; Facing the Giants and Fireproof are among the later films they released.

Since there is no language or sexual content, I recommend this film for people of all ages. This is a great
film to educate, encourage and even bring stray Christians back to where God would have them. However there is not enough mentioned about the gospel for a lost person to receive the full plan of salvation, so you will want to have your Bible handy if questions are asked, or simply lead them to our web page on
salvation, “Forgiveness”.