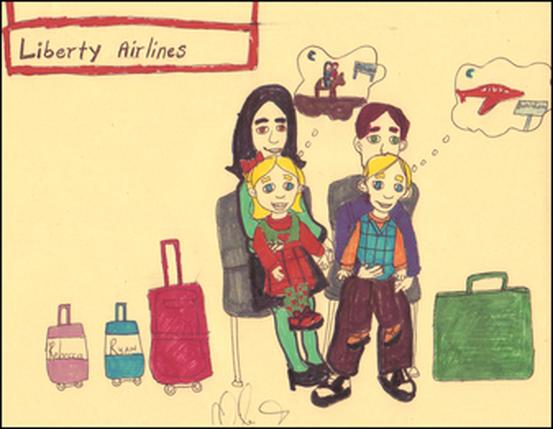 Story & Illustrations by LC Green, view more of her creations at www.greengreenjellybean.weebly.com
Ryan and Rebecca sat in the busy airport with their parents.

They were traveling to Denver to spend Christmas with their grandmother, uncle, aunt and cousins.

Their dad looked at his watch; it was nearly an hour before their plane boarded. He looked down at Rebecca and Ryan, who were playing with their hand held video games.

“Hey kiddos…grab a lap!” He said joyfully.
Excited, Ryan and Rebecca ran up to their mom and dad; Rebecca sat in her mother’s lap and Ryan in their dads.

“Tell me about your Sunday school lesson; did your teacher answer any of your questions?” He said looking at Rebecca.

“No, they traveled to the city of David which is called Bethlehem.” Their dad said smiling at their mother.

“Do you know who David was?” Their dad asked them.

“He was the boy who defeated Goliath.” Rebecca said.

“That’s right, and David was from Bethlehem.” Ryan had a confused look on his face.

“So why did they go to Bethlehem?” He asked softly.

“They had to go to Bethlehem to pay taxes.” Rebecca said looking at her brother.

Their mother pulled Rebecca close and kissed the top of her head.

“Well that’s not the only reason…you see Jesus being born in Bethlehem fulfilled a prophecy in the Old Testament.” Their mother said, smiling.

“What is a prophecy?” Ryan asked, looking at his dad.

The twins smiled. They understood.

“Hey we are going to Denver, the place you were born, just like Mary and Joseph was traveling to Bethlehem where Joseph was from!” Rebecca said grinning.

“I wonder if Joseph and Mary had to wait at the airport this long.” Ryan said softly.

“It took Mary and Joseph several days to travel From Galilee to Bethlehem, back then they either had to walk or ride on donkeys or camels.”

“Cool…I want to ride to Denver on a donkey!” Ryan exclaimed.

1 Samuel 17:12 (KJV) 12 Now David was the son of that Ephrathite of Bethlehemjudah, whose name was Jesse; and he had eight sons: and the man went among men for an old man in the days of Saul.

Micah 5:2 (KJV) 2 But thou, Bethlehem Ephratah, though thou be little among the thousands of Judah, yet out of thee shall he come forth unto me
that is to be ruler in Israel; whose goings forth have been from of old, from everlasting.

Luke 2:4-5 (KJV) 4 And Joseph also went up from Galilee, out of the city of Nazareth, into Judaea, unto the city of David, which is called
Bethlehem; (because he was of the house and lineage of David:) 5 To be taxed with Mary his espoused wife, being great with child.

What is awesome is that both Bethlehem, and David, who were both considered to be small and insignificant had the greatest connection to the birth of our Savior and Lord, Jesus Christ.

So, until we see you again remember Jesus loves you and keep your eyes and your heart open to His lessons on this journey through life.
God Bless LC