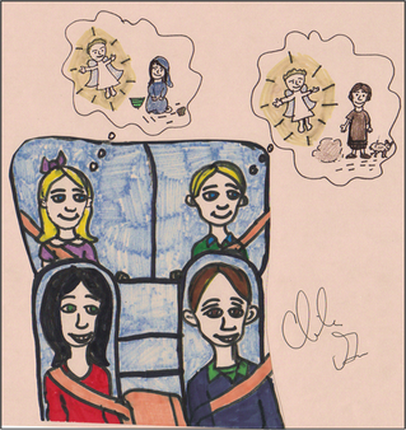 Story & Illustrations by LC Green, view more of her creations at www.greengreenjellybean.weebly.com
It was a Sunday afternoon, and twins Ryan and Rebecca were riding home from church with their parents. They lived in a nearby town, but the drive was always long.

Ryan and Rebecca sat quietly in the backseat…eager to get home to eat lunch.

Their mother asked them what they learned in Sunday school that morning. Rebecca grinned in excitement.

“An angel visited Mary and told her she was going to have a baby.”

Ryan, who had been quiet at first, chimed in.

“The Angel visited Joseph too!”

Their mother smiled. She asked them about the angel.

Their mother asked them who sent the angel, Gabriel.

“God sent the angel to tell Mary she was going to have a baby boy!” Rebecca joyfully proclaimed.

“YEAH…and his name was going to be JESUS” Ryan shouted.

Their father, who was driving, looked into the rearview mirror at his children. He asked them what was so important about the baby Jesus that God had to send an angel to deliver the news to Mary and Joseph.

“Because he wasn’t just any baby…” Rebecca said softly.

Their father nodded his head.

“Now that is news worthy to be delivered by an angel!”

The Angel visits Mary!
Luke 1:26-38 (KJV)  26 And in the sixth month the angel Gabriel was sent from God unto a city of Galilee, named Nazareth, 27 To a virgin espoused to a man whose name was Joseph, of the house of David; and the virgin's name was Mary. 28 And the angel came in unto her, and said, Hail, thou that art highly favoured, the Lord is with thee: blessed art thou among women. 29 And when she saw him, she was troubled at his saying, and cast in her mind what manner of salutation this should be. 30 And the angel said unto her, Fear not, Mary: for thou hast found favour with God. 31 And, behold, thou shalt conceive in thy womb, and bring forth a son, and shalt call his name JESUS. 32 He shall be great, and shall be called the Son of the Highest: and the Lord God shall give unto him the throne of his father David: 33 And he shall reign over the house of Jacob for ever; and of his kingdom there shall be no end. 34 Then said Mary unto the angel, How shall this be, seeing I know not a man? 35 And the angel answered and said unto her, The Holy Ghost shall come upon thee, and the power of the Highest shall overshadow thee: therefore also that holy thing which shall be born of thee shall be called the Son of God. 36 And, behold, thy cousin Elisabeth, she hath also conceived a son in her old age: and this is the sixth month with her, who was called barren. 37 For with God nothing shall be impossible. 38 And Mary said, Behold the handmaid of the Lord; be it unto me according to thy word. And the angel departed from her.

The Angel visits Joseph!
Matthew 1:18-25 (KJV) 18 Now the birth of Jesus Christ was on this wise: When as his mother Mary was espoused to Joseph, before they came together, she was found with child of the Holy Ghost. 19 Then Joseph her husband, being a just man, and not willing to make her a publick example, was minded to put her away privily. 20 But while he thought on these things, behold, the angel of the Lord appeared unto him in a dream, saying, Joseph, thou son of David, fear not to take unto thee Mary thy wife: for that which is conceived in her is of the Holy Ghost. 21 And she shall bring forth a son, and thou shalt call his name JESUS: for he shall save his people from their sins. 22 Now all this was done, that it might be fulfilled which was spoken of the Lord by the prophet, saying, 23 Behold, a virgin shall be with child, and shall bring forth a son, and they shall call his name Emmanuel, which being interpreted is, God with us. 24 Then Joseph being raised from sleep did as the angel of the Lord had bidden him, and took unto him his wife: 25 And knew her not till she had brought forth her firstborn son: and he called his name JESUS.

The Moral of the story…Unleashed:

God sent His angel, Gabriel, to deliver an important message to a young woman named Mary; she would give birth to JESUS, the son of God. God also sent his angel to a young man named Joseph, who was struggling with the decision of marriage, telling Joseph that the baby Mary was carrying, was JESUS the Son of God, the one who would save His people from their sins.


Join us as we celebrate the different events leading up to the birth of Christ.

Until we see you again, remember Jesus loves you and keep your eyes and your heart open to His lessons on this journey through life.
God Bless LC