Thanksgiving at the Kids Table 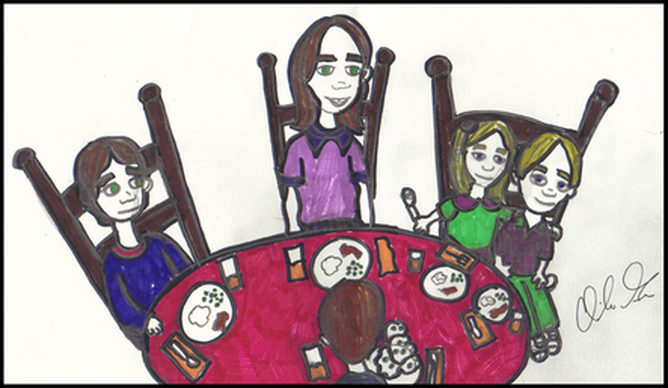 Story & Illustrations by LC Green, view more of her creations at www.greengreenjellybean.weebly.com
It was Thanksgiving, and Julia was forced to sit at the kids table, yet again.

Julia was almost twelve, and wanted to sit at the adult table with her older cousin, Luke, and his girlfriend, Lisa. Lisa had promised to do Julia’s nails after dinner.

Julia looked around the table at the little kids. Noah was constructing a mountain out of his mashed potatoes. Andrea was flicking peas at her twin brother Liam. Then Miles, who was a year younger than her, was scratching a rash on his arm…he was allergic to dogs…and unfortunately their great aunt Miriam gave him a big bear hug before dinner…she had five little dogs and wore traces of them on her overcoat.

Uncle Milton, a preacher, prayed over the meal. His voice was loud…and echoed throughout the room. Afterwards, she looked up at Noah, who was balancing a spoon on his nose. Miles had a sneezing fit, and accidently knocked his soda over. Julia grabbed her plate and walked over to where her mother was sitting. She asked her mother if she could sit with them…she was tired of the little kids and didn’t want to spend the entire meal watching Noah play with his food.

Her mother agreed, and cleared off a small spot between her and Uncle Milton. Julia took a bite of her dinner roll…it was nice to finally be among civilized people.

Aunt Helen, Uncle Milton’s wife, began talking about how terrible the choir sounded at practice the night before. Apparently, a new guy had joined and couldn’t sing very well…he ended up throwing the men off tune…and messed up the entire song they were practicing. Uncle Milton changed the subject…they didn’t raise enough money to fix the roof in the gym…he was going to have to use his own money to get it fixed. Her Uncle, William, who worked at a car dealership talked about how nobody was getting a Christmas bonus that year…Aunt Lydia, who was a nurse, complained about how she was going to have to work the morning of Christmas Eve to cover for some new girl who needed off.

Julia looked around. She couldn’t believe how ungrateful everyone sounded. It was Thanksgiving, they were supposed to be giving thanks…not complaining. Luke spoke up, Julia smiled, finally a voice of reason. He was going to have to replace the transmission on his truck; Lisa talked about how tuition had gone up.

Julia thought of the verse her Sunday School teacher had taught them that past Sunday.

1 Chronicles 16:34 (KJV) O give thanks unto the LORD; for he is good; for his mercy endureth for ever.

She got up from the table and walked back to the kids table. She sat down across from Noah. He was drawing a picture. When he finished he slid the paper across the table to her. At the top in big letters, it said, “I am thankful for” and at the bottom was a picture of a cross. Julia smiled. She thanked him for the picture. It was a wonderful reminder of what Thanksgiving was really about.

She glanced at her aunts and uncles at the adult table andthen looked around at her cousins at the kids table. Miles had stopped sneezing, and was helping the twins trace their hands to make a turkey. They laughed and Andrea gave him a big hug and thanked him for helping her. Afterwards, she ran to the big table to show her mother.

Julia bowed her head and asked Jesus to forgive her for not being thankful. She realized she was just as unthankful as everyone else was, she should have thanked Jesus for saving her and giving her the opportunity to sit and learn from little kids at the kids table; but instead she was looking at the bad in everyone around her because she did not get her way.

When Julia lifted her head she had a smile on her face, and she said, the one thing I am most thankful for is, Jesus and His forgiveness.

The Moral of the story…Unleashed: 1Chronicles 16:34 O give thanks unto the LORD; for he is good; for his mercy endureth for ever.

Instead of focusing on the negative things in our life, we need to give thanks to God because He has given us the ultimate gift; a relationship with Jesus Christ, whose love and mercy endures forever.


So until we see you again remember Jesus loves you and keep your eyes and your heart open to His lessons on this journey through life.
God Bless LC